LAW firm Ward Hadaway is continuing to play its part in helping to bring some of the world's most talented tech sector people to companies across the North of England.

The Top 100 UK law firm, which has offices in Newcastle, Leeds and Manchester, is again working with regional technology industry organisation Tech North on the Tech Nation Visa Scheme.

The scheme aims to make it possible for tech talent from around the world to come and work in the UK’s digital technology sector.

Tech North, the organisation which champions the digital sector and growth of digital businesses in the North of England, has the ability to endorse applications for the Tier 1 Exceptional Talent Visa.

Previously this allowed up to 200 exceptionally talented individuals in the digital technology field to come and work or set up businesses in the UK every year.

However, this has now been extended so that in the year from April 6 2017, a total of 250 Tier 1 Exceptional Talent Visas can be awarded to digital technology experts.

Ward Hadaway has been an official legal partner for the Tech Nation Visa Scheme since last year.

The firm has now signed up for a further year, meaning that immigration experts at Ward Hadaway will provide legal support for companies across the North who are looking to employ world leaders or rising stars in the tech industry, and those individuals thinking of applying for a visa to work in the UK tech industry. 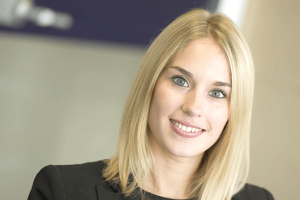 Flora Mewies (pictured), Solicitor in the Employment team at Ward Hadaway, said: “As the recent Tech Nation report showed, the tech sector across the North of England is creating jobs and prosperity at twice the rate of the rest of the economy.

“Over the past year, the sector has created over 20,000 jobs and has seen its contribution to the region’s economy grow by almost £2bn.

“Many of the companies in the sector are leading the world in their respective fields which means that, whilst the vast majority of jobs they create will be home-grown, having access to exceptionally talented people across the globe can help them to get even further ahead of their competitors.

“The Tech Nation Visa Scheme aims to help them do exactly that, ensuring that the economy in the North of England benefits from exceptionally talented individuals from overseas whilst keeping in line with Government immigration targets and policy.

“The fact that the scheme has been extended from 200 visas to 250 shows how important the Government sees the initiative in terms of keeping the UK tech sector ahead of the field.

“We are delighted to once again be involved in the scheme, to be working with Tech North and tech companies across the North on ensuring the region benefits from a world of expertise, something of increasing importance as the countdown to Brexit continues.”

Over the past year which Ward Hadaway has been involved in the Tech Nation Visa Scheme, the firm has advised a number of companies looking to recruit and/or retain staff on the options available to them for recruiting outside the EEA.

It has also helped many talented tech people to secure their endorsements and visas to work in the UK tech sector.

Over the coming year, Ward Hadaway will be taking part in a number of events designed to raise awareness of the scheme and of visa requirements in general.

The firm will also be offering visa surgery sessions in person and online via Skype.

Tech North Director, Richard Gregory, said: “Technology is a vital and fast-growing part of the North of England’s economy but competition for the best talent is fierce.

“As a result, for UK companies to continue to be at the forefront of the industry, it is important that they have the ability to bring in exceptional individuals from outside the country when the occasion demands it.

“We have enjoyed working with the team at Ward Hadaway over the past year. Their experience and know-how in the field of immigration law has been of real benefit to companies and individuals in the North and we look forward to working with them again over the coming year.”

Further details on the Tech Nation scheme can be found by clicking here.