FIVE lawyers have been promoted to the position of Partner at leading North law firm Ward Hadaway.

Stuart Craig, Gillian Muir, Neil Smith, Russell Ward and Fiona Wharton have now all joined the partnership at the firm, which operates from offices in Newcastle, Leeds and Manchester. 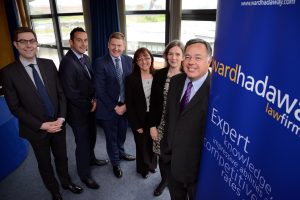 The quintet of promotions cover a wide range of practice areas across the firm, reflecting Ward Hadaway’s status as a full service provider of legal advice.

Stuart Craig is an Employment lawyer who advises a wide range of employers in the private and public sectors.

His clients include PLCs, limited companies, owner-managed business and NHS Trusts. As well as undertaking his own advocacy at Employment Tribunals, Stuart also regularly provides training to clients on a wide range of employment law topics.

She has acted in a number of high value claims surrounding birth injuries and also has extensive experience in many other types of cases such as spinal injuries, amputations and delay in diagnosis of cancer cases.

Neil Smith is part of Ward Hadaway’s extensive Property team. He advises on all aspects of commercial property matters with a particular emphasis on disposals and acquisitions for occupiers and investors and development transactions for a variety of local, national and international clients.

He has acted in a wide range of property transactions including multi-million pound land acquisitions for major supermarket and property investors and a number of large-scale housing and mixed-use developments across the North of England.

Russell Ward works in the Commercial Litigation team at Ward Hadaway and has advised on a wide range of commercial disputes both in the UK and on cases with an international dimension.

He has particular experience in advising on claims of professional negligence involving individuals in the professional services sector as well as acting in cases involving breaches of contract, confidentiality and restrictive covenants.

Fiona Wharton heads Ward Hadaway’s Charity and Social Enterprise team. Formerly the first in-house lawyer at the Comic Relief charity, Fiona advises charities and other social enterprise clients on a wide range of issues including formation, registration, governance, collaboration and the roles and responsibilities of directors and trustees.

She works with a wide range of national and regional charities and social enterprises including social housing providers, foundations and grant makers and education clients.

“Every one of our new Partners has demonstrated the combination of hard work, dedication to client service excellence and technical expertise which we look for in our lawyers and their promotions are richly deserved.

“It is particularly pleasing that a number of those who have been promoted began as trainees at the firm and have seen their careers progress at Ward Hadaway.”

Ward Hadaway now has a total of 85 Partners across its three offices. In total, the firm employs more than 450 people.